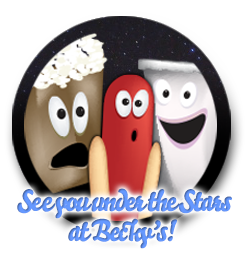 A dream and a hankering for the movies was all that was needed to "drive" William D. Beck (known to all as Becky) into the field as a full-fledged Cine-Photographer and projectionist.

With a love for film, and a desire to share, Becky started showing movies in his parent's living room. Using a hung bed-sheet, Charlie Chaplin often graced this home-made movie screen. This is about when it all began.

Between the years 1936-1939, Becky began taking his movies from site to site, showing films at numerous locations; Uncle Charlie's Restaurant, Minnich's Restaurant, and at the baseball field (now known as Bryfoyle Memorial Park). In 1942, Becky had an indoor theater "Midway" located in East Mauch Chunk, PA. "The Bucket of Blood" was the nickname earned to that theater due to all the westerns shown there. Becky was especially fond of westerns.

It wasn't until 1946 that Route 45 Drive-In opened at it's present day Becky's location. With help from his wife Alice, and numerous family members, Route 45 Drive-In (then named for the road it was located on) was a success. Around 1971 the state of PA changed the highway number from Route 45 to Route. 248.

Becky continued to upgrade his business advertising in-car speakers to accommodate 440 cars. A concession stand delivered smells of Alice's fresh cut french fries. From hamburgers and hot dogs to penny candy and pretzel rods, Becky could provide a dinner out of just satisfy a sweet tooth. There was a playground for the children, free pony rides, and bands playing certain nights. You could say it was the "ticket" for entertainment.

Becky died on April 4, 1987, and his wife, Alice, passed away on December 28, 2007. She was preceded in death by their second eldest son, Dale, March 28, 1997. The four surviving children of Becky and Alice continue to operate the drive-in along with their families, showing family films starting April to mid-October. They include sons Darrell and Dennis, daughters Mary Mayberry and Cindy Deppe and their spouses, Joe and Dean. Some of the grandchildren get into the act as well. They include: Wanda Beck, Sean Beck, Scott Beck, Christopher Deppe, and Nicholas Deppe, along with great grandchildren Michael Marino and Julian Deppe. They are assisted by long time employees, Marc Hillenbrand, Tim Minnich, Dave Clark, and Duane Deppe to name a few.

We here at Becky's hope you have enjoyed seeing some of our history and that when you're in the area, you will visit us for an enjoyable evening. We will continue to try our best to delight and entertain you with our creativity and showmanship... Such as the way we dress up to suit the movie... 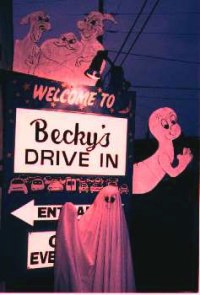 ...to cutouts and costumes for Casper.

We hope to see you this summer at the drive-in, where you can bring your own lawn chairs and sleeping bags and make yourself feel right at home. We'll supply the food and entertainment + an enjoyable evening under the stars. See you soon!